Veteran farmer homesteads with a kick 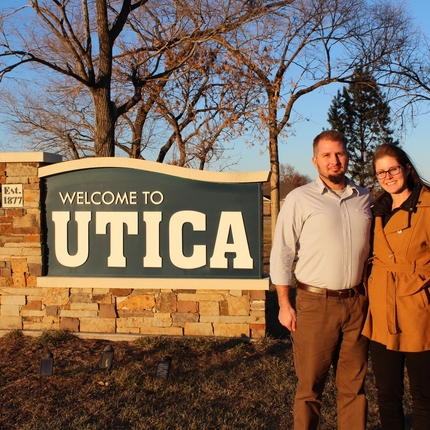 Three years ago, Matt and Emely Hendl didn’t picture themselves as farmers.

They thought Emely would support their family with her government service job after Matt retired after 20 years in the U.S. Navy.

However, after changing their minds a few times, they decided to move their daughter, Annika, dog, cat and hamster, to the Platte River valley in Nebraska to pursue an altogether different venture: small-scale farming.

Matt and Emely began their agricultural adventure in Connect­icut. They lived on 7.5 acres with a small-scale organic farm on one side and a Community-Supported Agriculture (CSA) farm on the other.

Emely helped the organic farmer raise microgreens and herbs and sell them at the local market.

And, after visiting with the owner of the CSA farm, the couple decided they could produce their own food, starting with chickens.

“I thought a little bit bigger than we needed to,” Matt said. “It was the first time I hadn’t been under­way, attached to a submarine.”

He cleared out a 50-foot by 60-foot area, using lumber that was on the land to create fence posts and build a chicken coop. And ended up with 22 chickens.

“Every single one of them had a name,” Matt said. “They were everything from Bob and Marley to Baby Alligator and Twilight Spar­kle. Our daughter was just like a little chicken whisperer.”

Then the couple was wowed by their CSA neighbor. She won a women entrepreneur award for those 25 years or younger, com­peting against women who worked at large corporations.

“That made us think, if some­one from small town Connecticut can do something like that, we can too,” Matt said.

While making their decision of where to go next, they looked at the Midwest for its agriculture and proximity to family. However, Matt said he still has a bit to learn.

“As one of the most senior ranks in the military, I was used to knowing what I was doing,” Matt said. “I feel like I’m starting over. I have no idea what I’m doing.”

“We said, We’ll just come,” Emely said. “People would call us homesteaders. We’re not pioneers, but what we want to do is essen­tially homesteading with a kick.”

Matt started agricultural cours­es at the University of Nebraska at Lincoln in the fall. The couple also has found mentors in Del Ficke and Kerry Hoffschneider (Emely’s high school classmate).

“We have good mentors who won’t let us fail,” Matt said. “We’re so appreciative and humble that they’re able to give us this oppor­tunity.”

The Hendls are helping out at Ficke Cattle Company, owned by Del, while using the land to work on their own projects.

First on the to-do list is starting a destination farmers market at Ficke Cattle Company, outside of Pleasant Dale, Neb.

Additionally, the Hendls would like to pursue agritourism, provid­ing a place with cheese tasting, beekeeping classes and more.

The couple is inspired by agri­tourism on the east coast, particu­larly for people who did not grow up on farms.

“They are able to smell the farm and hear the sounds,” Emely said. “When you see the sun setting on a hill with cows on it, and you’re drinking a coffee, that’s serenity.”

The Hendls would also like to host school field trips.

Another future venture for the Hendls is providing agriculture education and training.

“A lot of people are coming to this state who have never lived here, like me,” Matt said. “They don’t have an agriculture back­ground but, they want to know where their food is coming from.”

One way is to provide mobile chicken tractors and laying chick­ens – two at a time – for rent.

“People are scared about what they don’t know,” Matt said. “We want to provide an avenue to get educated and to get more comfort­able, kind of like what we’re doing, and what Del’s done for us.”

The couple has been encouraged by the sense of community and support they’ve received.

“In the military, that is what you strive for,” Matt said. “To be able to get that in a community that isn’t the military is amazing.”

“We’re not afraid of the hard work,” Emely said. “Our goal is to be able to work from home and provide the love and the informa­tion to people. We have the plan and the dream. We’re ready.”

Matt and Emely are helping the Center for Rural Affairs and Legal Aid of Nebraska plan “Answering the Call: Veteran Farmer Confer­ence” on June 22 in Seward, Neb.

The conference is free and will provide veteran farmers an ave­nue to network and an opportuni­ty to discover available resources and services.

On the schedule is a morning of presentations and discussions, a local foods lunch, and two farm tours in the afternoon.

Feature photo:  Matt and Emely Hendl have settled in the Utica, Neb., area, and, with the help of their mentors, plan to offer agritourism and education to others. For now, they are renting a house in town, with the Utica sign in their front yard. They are also helping the Center for Rural Affairs plan an inaugural Veteran Farmer Conference set for June. | Photo by Rhea Landholm

END_OF_DOCUMENT_TOKEN_TO_BE_REPLACED 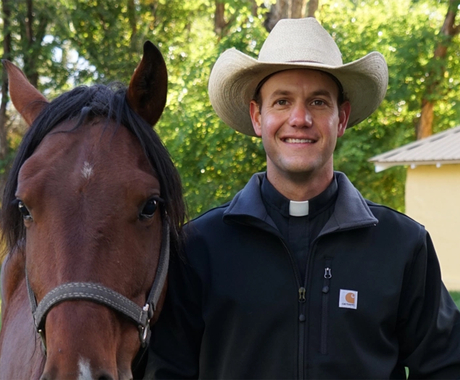 Nathan Beacom
02.19.2021
Catholic priest finds a new way to serve his community
Before Father Bryce Lungren was a priest, he was a cowboy. Today, he gets to be both. In the early 2000s, while working on a ranch in Montana, Bryce spent his days rounding up cattle, and was engaged...
END_OF_DOCUMENT_TOKEN_TO_BE_REPLACED