Nearly two years after Medicaid expansion passed by ballot initiative enrollment will begin. Here we have put together the information you need to know about who is eligible, how to apply, and where to get help.

Changes due to COVID-19

Until some point in 2021, most individuals will only have access to the basic benefits package. The Centers for Medicare and Medicaid Services (CMS) was unable to authorize the tiered system proposed in Nebraska prior to enrollment beginning in August 2020. Due to this delay, DHHS has decided to proceed with the scheduled enrollment and implementation dates without providing the prime benefits. Only those who are 19 to 20 years old, pregnant, or medically frail will have access to prime benefits for the time being.

In 2010, Congress passed the Patient Protection and Affordable Care Act. The Act mandated that all states expand their Medicaid programs to provide coverage to low-income adults, ages 18 to 64, who were not previously covered. Nebraskans earning less than 138 percent of the federal poverty level, or $17,000 a year, fall into this category.

In 2012, the U.S. Supreme Court, through National Federation of Independent Business v. Sebelius, took away the federal government’s authority to enforce mandatory Medicaid expansion—leaving the decision of expansion up to each individual state. This outcome opened up a coverage gap for millions of Americans in states that chose not to expand their Medicaid programs, including Nebraska.

In 2018, Nebraskans approved Initiative 427, which expanded Medicaid eligibility to the 90,000 hardworking neighbors and friends who fall into the coverage gap. After voters adopted what the Legislature failed to do six times, state lawmakers and officials must decipher the implementation of the expanded Medicaid program. The Center for Rural Affairs remains committed to a timely, effective rollout without any gimmicks or nonsense requirements. The health of 90,000 of our neighbors depends on a quick and straightforward implementation—they need health care, not an experiment.

The “coverage gap” refers to individuals who earn too much income to qualify for traditional Medicaid programs, but too little to afford health insurance subsidies under the Affordable Care Act.

Empowering those in Nebraska’s coverage gap

Across Nebraska, there are 90,000 people between the ages of 18 and 64 who are in the coverage gap. These hardworking residents earn less than $17,000 a year. They are our neighbors, the server at the local restaurant, the farmhand who pitches in during harvest, or the single parent working multiple jobs to put food on the table. Medicaid expansion would help them gain health insurance coverage, empowering them to achieve their full potential.

Nebraskans who fall in the coverage gap, by county 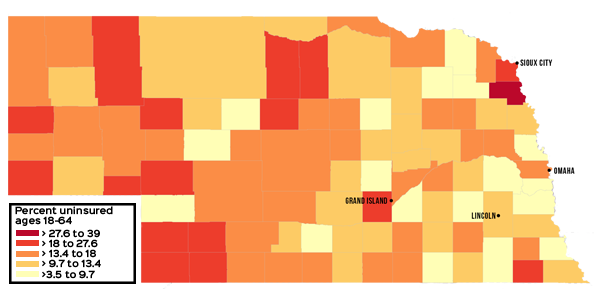 Click here for a fact sheet of Nebraskans who fall into the coverage gap, by county.