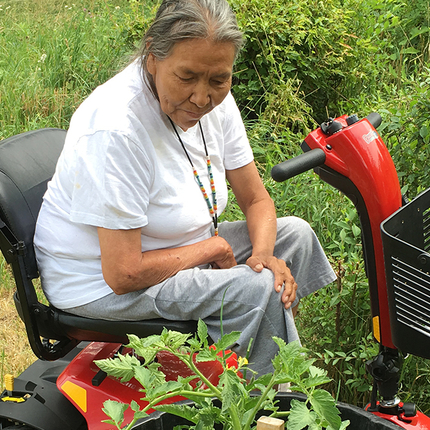 Food and economic security in rural communities is directly related to community development.

In many rural areas, food purchased at grocery stores is imported, and dollars spent for this food ultimately end up out of state.

For example, in our home state of Nebraska, our staff found residents spend nearly $5 billion annually on food. Approximately 90 percent of that money leaves the state, as reported in a 2015 Center for Rural Affairs white paper.

In response, Center staff brought in Mark Winne, a national food policy council expert, and together hosted a public discussion.

The conversation centered on what makes strong regional food systems. Rural communities are strengthened by keeping the wealth within the community, specifically with local food producers and businesses. Students can see their future within their communities when they have a connection to their local food system. Healthy systems provide an avenue for communities to work together on issues they care about, and tend to be found in more engaged communities.

As a result of the dialogue, the Nebraska Food Council was formed. The working group contains seats for rural and urban producers, processors, wholesale markets, health care and nutrition, nongovernmental and religious organizations, public health and services, environmental and natural resources, food deserts, and food assistance recipients. There is a place for everyone at the table.

This diverse body of participants strives to create equitable access and opportunity to all of Nebraska’s communities, producers, and small businesses through regional food systems.

A statewide food system assessment is now underway, led by the Nebraska Food Council. Results will be released during events designed to activate or inform local councils across the state, and through learning opportunities offered to local food system leaders.

Are you interested in joining or supporting Nebraska’s efforts? Do you have a food council in your state? Contact me at 402.320.3444 or sandrar@cfra.org.

What is a food council?

University of Nebraska – Lincoln Extension is creating an inventory of resources that support the local food system in Nebraska. This is part of an emerging effort to better coordinate resources and increase capacity for regional food systems work within the University system, while at the same time building better understanding and strengthening the networks that exist among other individuals and organizations also doing work in this area.

One initial goal is to complete a mapping process to help illustrate these connections. The results of this inventory will be made available when completed.

Feature photo: A 2015 Center for Rural Affairs white paper found Nebraska residents spend nearly $5 billion annually on food. Approximately 90 percent of that money leaves the state. Our staff is working to combat that by leading community food efforts statewide and on the Omaha and Santee Reservations. Pictured is Luzena Tyndall, of Macy, Nebraska, who grew her first-ever tomatoes in 2016 with our help. | Photo by Suzi French

END_OF_DOCUMENT_TOKEN_TO_BE_REPLACED

Gladys Godinez
01.14.2021
Packing plant workers need better protections
Inside packing plants throughout our nation, workers continue to lack enough personal protective equipment, or PPE; don’t have enough space for social distancing; and continue to worry about what is going to happen to them.
END_OF_DOCUMENT_TOKEN_TO_BE_REPLACED