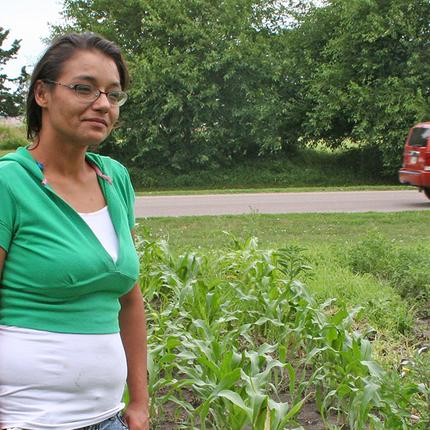 About two hours west of Sioux City, Iowa, we dropped by the Santee Sioux Reservation to tag along with LeAnn Red Owl while she visits gardens throughout the community.

In the summer of 2016, LeAnn was one of the Center for Rural Affairs community food specialists who worked alongside members of the Santee Sioux and Omaha Tribes to improve access to fresh, nutritious food grown in their own communities, often in their own backyards.

In each community, Center staff have provided demonstrations with garden tilling, seeds and starter plants and have supported new farmers’ markets. They regularly make garden visits throughout the growing season.

In Santee, staff have hosted various workshops, including nutrition, foraging and pasta sauce canning workshops. And, “Gardeners of the Month” were identified throughout the growing season.

We visited Santee in late June, when most of the community was gathered at a health fair. Booths, inflatable bouncy castles, entertainment and food brought people to the Health and Wellness Center, and we felt a great sense of community among residents.

LeAnn lives just across the street from the Health and Wellness Center, so she guided us to her own garden first.

“I’m growing corn for my grandma,” LeAnn said. “My grandma managed to keep the tradition of growing corn even while living in the city, with an itty bitty backyard.”

LeAnn’s plans are to dry out the corn and sell it.

During a recent foraging workshop, participants toured LeAnn’s garden and discovered huitlacoche, or corn smut, a fungus similar to a mushroom that grows on corn. Sample pieces were sauteed with fresh corn kernels for everyone to try, and participants enjoyed the new delicacy.

LeAnn next took us to Mari James’ garden, where she has healthy looking potatoes and quite a variety of plants.

Mari got involved in gardening earlier this year, when her daughter brought home a pumpkin seed from school for Mother’s Day. That seed, now a nice green vine, has its own space on the side of Mari’s house.

On the other side of town, Les Rave and his granddaughter Heaven have been putting in gardens for five years. When we visited, Les identified a few tomatoes and peppers that were almost ripe.

Just down the street from Les, we identified Vern Cross’ yard by the beautiful tiger lilies surrounding the house. Vern told us he has been gardening since he was 8 years old. He said his mother taught him how to garden and how to can the extra produce.

“My favorite part is working in it - it gives me something to do,” Vern said.

He plans to make salsa and taco sauce, so he planted a large amount of tomatoes and onion.

We then crossed town to a demonstration garden behind Nebraska Indian Community College, where a wide variety of garden crops and herbs were planted, including tomatoes, tomatillos, cucumbers, carrots, eggplant, kale, squash, onions, potatoes, mint and oregano. The community members can visit the space to learn about planting and to see the different crops that can grow in the region. We recognized many different plants and herbs.

Nearby, we saw plots reserved for community members who want to garden but don’t have the space at their own homes. One community member used black garden matting and had lettuce and tomato plants sprouting up along the rows.

This year, staff also planted Indian corn so the community can see how it is grown. The work is helping to keep traditions of the Santee Sioux alive.

Center staff members work in these communities not only during growing season, but also year-round. They assist and train on gardening techniques and preparing produce, food products and artwork for market; and provide food demonstrations.

On my visit to Santee, and on a subsequent visit to Walthill, it wasn’t hard to find the impact of our garden and market projects over the past three years. We spotted gardens in several yards - but in only two days, we didn’t have time to tour the 50 gardens in Santee and more than 100 gardens in Walthill, Macy, Rosalie and in between.

In addition, our staff helped start 80 container gardens on the Omaha Reservation for those unable to have gardens in their yards. And we host farmers’ markets regularly in Santee, Macy and Walthill.

Suzi French, Center community food specialist with the Omaha Tribe, a few hours east of Santee, expressed the feelings of gardeners in both communities.

“We are doing it! We are growing our very own fresh food,” she said. “We are eating it, sharing it and some are selling it. We are teaching our children about growing food. We are changing our food system.”

Feature photo: Mari James shows us her garden, where she has healthy looking potatoes and quite a variety of plants. | Photo by Rhea Landholm