Who Will Sit Up With the Corporate Sow? 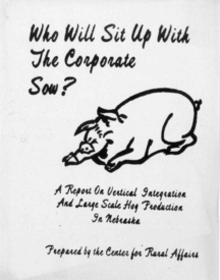 Who Will Sit Up With the Corporate Sow?

The 1975 report predicts that, “as confidence in large scale production spreads, more sophisticated tax investments methods such as limited partnership schemes can be expected…  These developments will hasten a shift in production to the commercial companies like the giants of the cattle feeding business, where less that one half of one percent of the firms produce over half of the cattle.”

Too often elected officials and policy makers ask us to believe that the changes that are occurring in our communities are inevitable, the product of invisible economic forces that cannot be foreseen. The Center’s Corporate Sow report, among many other writings, tell a different story. They remind us that our policy choices today will shape our future. And that the ideas that we bring forth now are often grounded in the work and wisdom of those who came before us.

More about the Writing and Publication of the Report

The following is an excerpt from The Center for Rural Affairs in the First 20 Years.

Perhaps because we really didn’t know much about agriculture or agricultural policy, a lot of early effort went into “research” or investigative reporting. The first project was an attempt to define the corporate farming issue by doing a 13-county land tenure study in Northeast Nebraska.

We learned how to use public records in the courthouse, how to trace land ownership history, how to get information from the county level federal farm program offices, and how to use Secretary of State records. The report was published informally on legal-sized paper, stapled in the corner. Its findings were unimpressive, and it got almost no notice. But it had taught us the disciplines of fact finding and much about how to get the information you want.

Next, we dispatched Lynn Spivak, a former VISTA volunteer with no background in agriculture, to find out about vertical integration in the pork industry. We were looking for evidence of forward contracting arrangements or other semblances of the heavily industrialized poultry industry.

She came back with a tale about sow leasing by feed companies and the advent of large-scale confinement technology and with details about the complex cooperatives farmers were organizing and how the tax laws and the technology itself (largely developed at publicly-funded universities) were encouraging the rapid transformation of these farmer-owned cooperatives into closely held, investor-owned corporations that would eventually prove that you don’t need farmers to raise hogs. We were stunned by the data she had gathered on 43 operations in Nebraska. It named names, gave the numbers.

None of us really knew what it meant, so we traveled to the University of Missouri to visit with V. James Rhodes, a leading researcher in livestock policy and markets, and to Creston, Iowa, to get Blobaum’s insights into how to tell the story. The result was Who Will Sit Up With the Corporate Sow? (1974), perhaps the most prescient piece of work the Center has ever done.

You can read that report almost 30 years later and marvel at the accuracy of its predictions. It earned us our first lawsuit threat (Walnut Grove didn’t like what we said about their sow leasing program), our first headlines, and our first notice in the agricultural research establishment. The report was formally published by us with a heavy stock cover, although the cover was hand drawn. Not even the title was typeset – Spivak hand wrote it. It looked amateur then. It looks fashionable today.

The growth of confinement hog feeding in Nebraska was accommodated by the movement of the Corn Belt west by the growth of new irrigation technologies exploiting the Ogalalla aquifer. Capital intensive center pivot irrigation systems were opening up new lands to irrigation, imposing environmental risks, and creating opportunities for investors and wheeler-dealers to create the first very large-scale crop farms.

We used our land-tenure research skills to find out who was doing what on what kinds of soils in a handful of the counties most impacted by these developments. Wheels of Fortune (1975) told that story, naming names, substantiating the facts, creating a big stir, prompting more lawsuit threats, and boosting the effort to restrict corporate farming.

This report drew attention from the Washington Post and the New York Times, but its impact might best be measured by the rueful description given it in the newsletter of the Nebraska Society of Professional Farm Managers and Appraisers: “It appears,” the newsletter reluctantly reported, “to have been professionally done.”

Following was a report on the structure of the banking industry in Nebraska, with a detailed analysis of ownership and control arrangements, using creative data sources such as FDIC disclosure reports showing which banks had large blocks of stock mortgaged to another bank (Where Have All the Bankers Gone?, 1978).