Trampled Dreams: The Neglected Economy of the Rural Great Plains 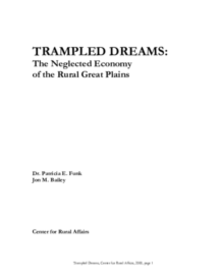 "Trampled Dreams: The Neglected Economy of the Rural Great Plains" describes the economic conditions of small agricultural communities as compared to other urban and metropolitan areas in a six-state region comprised of Iowa, Kansas, Minnesota, Nebraska, North Dakota and South Dakota.

Based on the United States Department of Agriculture county typology system, we identified 261 counties (of 503) throughout this region that have an agricultural based economy (20 percent or more of county income from agriculture). Of these agricultural counties, 185 are very rural, with no population center of 2,500 or more. We have designated these counties as “Rural Farm.” Another 76 counties are classified as “Urban Farm,” agricultural based with a population center of between 2,500 and 19,999. Together, these agricultural counties comprise 52 percent of the counties in this six-state region and 14 percent of the region’s population. The other county groups are non-agricultural, non-metropolitan counties, referred to as “Nonfarm” (192 counties) and metropolitan counties (50 counties).

The analyses for this report are based on United States Census data for 1989 and 1995 and annual data from the United States Bureau of Economic Analysis, Regional Economic Information System for the years 1988 to 1997. It is important to note the 1988 to 1997 period generally does not include the 1980s farm crisis years or the current farm crisis.

The following is a summary of the findings of this study on the economic characteristics of agricultural communities in the Great Plains, with special emphasis on rural farm counties.

While this report does not present a comprehensive review of either state or federal economic and rural development policies, it does draw a number of implications and makes recommendations for pubic policy that are derived from work in the small agricultural communities in this region and from the data presented in this report:

This report updates some of the analyses presented in the Center for Rural Affairs’ 1989 report, "A Socio-Economic and Demographic Profile of the Middle Border," and in its 1990 rural economic policy report, "Half a Glass of Water." Those reports reviewed the economic conditions of agricultural communities in this six-state region, and analyzed state economic development policies that impacted them. The following characterization of agricultural communities presented in "Half A Glass of Water" is just as valid today as it was in 1990:

“They (small, agricultural communities) are substantial communities with strong traditions and values, and they suffer from the same development problems. But it is important to recognize that those problems are fundamentally different from the problems of the urban communities and trade centers in these states. Like Appalachia, they constitute a region in distress, but one with unique and important characteristics. They are a resource these states share, but one that presents a special challenge and a special opportunity to the states.”