Rural Electrification 2.0: The Transition to a Clean Energy Economy 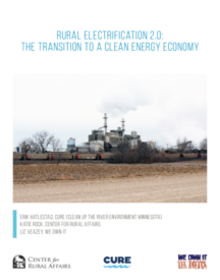 Click the image to download.
"Rural Electrification 2.0: The Transition to a Clean Energy Economy" is written by Erik Hatlestad, CURE (Clean Up the River Environment Minnesota); Katie Rock, Center for Rural Affairs; and Liz Veazey, We Own It.

Rural America faces a conundrum in the expanding development in renewable energy. Many rural areas in the country are providing the infrastructure for a clean energy future through transmission lines, wind turbines, and utility-scale solar. But, much of the power itself is not used locally in rural communities. Many rural communities are dependent on the energy resource mix of their rural electric cooperative. Nationally, these cooperatives derive 67 percent of their energy from fossil fuels.

The U.S. public is increasingly demanding clean energy to pursue energy independence and reduce greenhouse gas emissions. As the price of renewables​ has dropped, investments in new clean energy generation have accelerated. Generation from solar and wind is expected to grow by 6 percent and 14 percent respectively in 2019. Maintaining flexibility in energy resources is key to controlling costs as the U.S. shifts to carbon free energy.

For years, electric cooperatives have argued the costs of transitioning to clean energy have been too high for them to move forward. Now, drops in the price per megawatt of wind and solar, even at an unsubsidized level, challenge that claim. A recent financial modeling of the energy mix of Colorado showed that transitioning to clean energy is affordable. Another report demonstrated 42 percent of the world’s coal capacity is unprofitable, and the U.S. could save $78 billion by closing coal plants, concluding that utilities can build new wind farms at a lower cost than the operation of existing coal plants. One recent analysis calculated that most U.S. coal power plants could be replaced by nearby wind and solar resources, at an immediate savings to customers. A 2018 report from Rocky Mountain Institute shows Tri-State Generation and Transmission Association, which includes 43 electric cooperatives and public power districts in Colorado, Nebraska, New Mexico, and Wyoming, could save at least $600 million by 2030 and reduce their risk by using their coal plants less and investing in more renewable energy.

In 2016, Kit Carson Electric Cooperative bought themselves out of their Tri-State Generation and Transmission Association contract to transition to 100 percent daytime solar generation, which is projected to save at least $30 million over 10 years. And, other Tri-State Generation and Transmission Association member cooperatives are looking into buying themselves out or increasing the association’s 5 percent cap on local renewable energy generation. Cooperatives across the country are locked into similar long-term, 40-plus year contracts with their generation and transmission cooperatives, some allowing only a couple dozen kilowatts or zero local renewable energy generation. These long-term contracts are often driven by outstanding debt for coal plants.

With the rapidly declining cost of clean energy and the rise in the cost of coal and other fossil fuel sources of energy, continuing to operate these plants is becoming increasingly costly. Rural communities beholden to these uneconomic assets held by cooperatives are on the path to higher utility rates, as well as insolvent and unstable utility organizations without a change in direction.

In 1989, the Colorado-Ute Electric Association encountered financial trouble resulting in bankruptcy. Tremendous trust was placed in two very strong-willed managers for the 30 years prior to filing bankruptcy. In hindsight, the situation could have been avoided but for a strong manager/weak board corporate culture. The managers failed to address the growing financial situation, and board leadership failed to adjust its vision of the future  to emerging realities. Once the financial troubles grew to a crisis, creditors and regulators were unsympathetic to Colorado-Ute Electric Association’s pleas for help. This bankruptcy provides a lesson and opportunity for cooperative board members to ensure they are asking the right questions, staying grounded in the latest energy technology and market trends, and standing up for memberowner​ interests. This kind of forward-looking leadership will be required to usher in an equitable coal transition at electric cooperatives that takes workers, communities, and member-owners into account.

Rural communities could better pursue a clean energy future if current debt on existing coal plant infrastructure could be eliminated in exchange for a requirement to invest in clean energy and energy efficiency. Such a deal would incentivize the retirement of existing coal plants. These investments would help rural communities transition to energy independence and clean energy, but it could also provide cost savings through energy efficiency upgrades.

Instead, incoming cash from ratepayers is being used to pay off debts from old, uneconomic coal plant infrastructure. By being relieved of these debtladen​ assets, cooperatives would have more resources to invest in clean energy, although there is a need to ensure that member-owners see economic benefits of these policies. In this report, we describe successful efforts and a path forward to expanding such efforts.