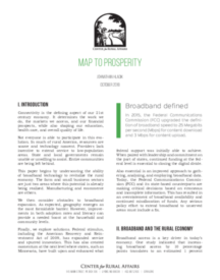 Click the image to download.
Connectivity is the defining aspect of our 21st century economy. It determines the work we do, the markets we access, and our financial prospects, while also shaping our education, health care, and overall quality of life.

Not everyone is able to participate in this evolution. In much of rural America, resources are scarce and technology nascent. Providers lack incentive to extend service to low-population areas. State and local governments remain unable or unwilling to assist. Entire communities are being left behind.

This paper begins by underscoring the ability of broadband technology to revitalize the rural economy. The farm and small business sectors are just two areas where this potential is already being realized. Manufacturing and ecommerce are others.

We then consider obstacles to broadband expansion. As expected, geography emerges as the most formidable barrier. However, improvements in both adoption rates and literacy can provide a needed boost at the household and community levels.

Finally, we explore solutions. Federal stimulus, including the American Recovery and Reinvestment Act of 2009, has expanded service and spurred innovation. This has also created momentum at the next level where states, such as Minnesota, have built upon and enhanced what federal support was initially able to achieve. When paired with leadership and commitment on the part of states, continued funding at the federal level is essential to closing the digital divide.

Also essential is an improved approach to gathering, analyzing, and employing broadband data. Today, the Federal Communications Commission (FCC) and its state-based counterparts are making critical decisions based on erroneous and incomplete information. This has resulted in an overstatement of broadband availability and continued misallocation of funds. Any serious policy effort to extend broadband to unserved areas must include a fix.