Generation and Delivery: The Economic Impact of Transmission Infrastructure in Rural Counties 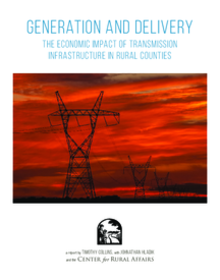 A clean energy transition is underway in communities across the United States creating a success story that has transformed the rural economy. Competitive prices, improved technology, and consumer preference guarantee the evolution will continue.

Transmission projects announced years ago are now beginning to come online. Combined with new wind and solar installments, these projects have become important pieces of the economic puzzle in the rural Midwest and Great Plains. While the significance of renewable energy to rural economic development is well understood, less is known about the impact of transmission development on rural economies.

Transmission expansion spurs economic development in three phases. The first is driven by physical construction. The second takes place after the line is energized and placed into service. The third derives from taxes and fees assessed on the project.

This paper explores the third phase of transmission-driven economic development to gauge the impact on neighboring rural communities. We identified three recently constructed transmission projects in Upper Midwest and Great Plains states. For each project, we examined the state statutes that govern revenue collection and distribution and how those guidelines are implemented at the local level.

We found that considerable variation exists among states. In Minnesota, tax revenue derived from transmission infrastructure is used to offset local property taxes. In Wisconsin, environmental impact fees must be paid by transmission developers, and this revenue is used to fund community grant programs. Though transmission infrastructure in Kansas is tax-exempt for the first 10 years, a small amount of revenue is collected through taxes assessed on substations, which is then shared with county agencies.

Each approach rightfully reflects the different priorities and fiscal realities of the administering state. However, our analysis reveals that communities affected by transmission development realize significant benefits only when state law allows for most or all of this revenue to be invested locally. As these communities are on the front lines of any development, residents must have a role in determining how and when this increased revenue is put to use.

This report is written by Timothy Collins, consultant, with support from Johnathan Hladik, Policy Program director.