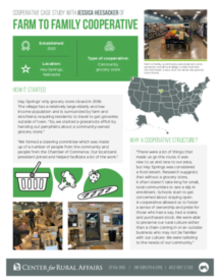 The village has a relatively large elderly and low-income population and is surrounded by farm and ranchland, requiring residents to travel to get groceries outside of town. “So, we started a grassroots effort by handing out pamphlets about a community owned grocery store.”

“We formed a steering committee which was made up of a number of people from the community and people from the Chamber of Commerce. Our local bank president joined and helped facilitate a lot of the work.”

Why a cooperative structure?

“There were a lot of things that made us go this route. It was new to us and new to our area, but Hay Springs was considered a food desert. Research suggests that without a grocery store, it often doesn’t take long for small, rural communities to see a slip in enrollment. Schools start to get concerned about staying open. A cooperative allowed us to foster a sense of ownership and pride for those who had a say, had a stake, and purchased stock. We were able to preserve our rural culture rather than a chain coming in or an outside business who may not be familiar with our culture. We were tailoring to the needs of our community.”

Q: Is there anything that you believe sets your cooperative apart from others or makes it more successful?

A: We took every opportunity possible to involve the community; from creating our mission, vision, and logo, to our name, to what we were going to have in the grocery store. Going the cooperative route allowed us some autonomy to do that.

Q: Were there any helpful resources you used to answer questions you had about cooperatives?

A: One of the most important things we did was network and develop a partnership with the Nebraska Cooperative Development Center. They helped guide us through and introduced us to a lawyer who had helped other communities like ours.

Other than forming partnerships and networking, It’s also really important to figure out your finances.

“Despite as much research and number crunching as we did, we had no idea how much more it was going to cost us to get this little grocery up and going.”

Principles of a Cooperative

Cooperatives are voluntary organizations, open to all persons able to use their services and willing to accept the responsibilities and meet the requirements of membership, without discrimination. Members have control over setting policies for the co-op.

Cooperatives are democratic organizations controlled by their members, who actively participate in setting their policies and making decisions.

Members contribute equitably to, and democratically control, the capital of their cooperative.

Cooperatives are autonomous, self-help organizations controlled by their members.

Cooperatives provide education and training for their members, elected representatives, managers, and employees so they can contribute to the development of their cooperatives.

Cooperatives serve their members most effectively and strengthen the cooperative movement by working together through local, national, regional, and international structures.

Cooperatives work for the sustainable development of their communities through policies approved by their members.

This project was developed using a U.S. Department of Agriculture Rural Development Socially Disadvantaged Groups Grant. The Center for Rural Affairs is an equal opportunity provider and employer.