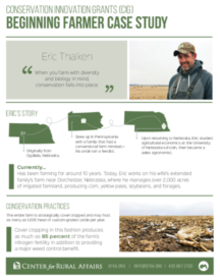 Click the image to download.
Originally from Ogallala, Nebraska, Eric spent part of his childhood in The Cornhusker State, and part of it in The Keystone State—Pennsylvania. He grew up in a family with a conventional farm mindset. Upon returning to Nebraska, Eric studied agricultural economics at the University of Nebraska-Lincoln, then became a sales agronomist.

Today, Eric manages a farm for his wife’s extended family near Dorchester, Nebraska, which has transitioned to 100 percent organic production. More than 2,000 acres of irrigated farmland produces corn, yellow peas, soybeans, and forages. The entire farm is strategically cover cropped and may host as many as 1,000 head of custom-grazed cattle per year. According to Eric, cover cropping in this fashion produces as much as 85 percent of the farm’s nitrogen fertility in addition to providing a major weed control benefit.

For those looking to get into farming, or who have just started, Eric says everyone makes mistakes, some more costly than others, but offers advice for success.

“Make yourself a valuable asset to somebody,” he said. “Older farmers are looking for an exit, and if you can prove your skills to them and learn from them over a few years, you will likely face greater success and more opportunity in farming.”

Check out our feature blog on Eric, by clicking here.

This material is based upon work supported by the Natural Resources Conservation Service, USDA, under number 69-3A75-17-46. Any opinions, findings, conclusions, or recommendations expressed in this publication are those of the authors and do not necessarily reflect the views of USDA. USDA is an equal opportunity provider and employer.