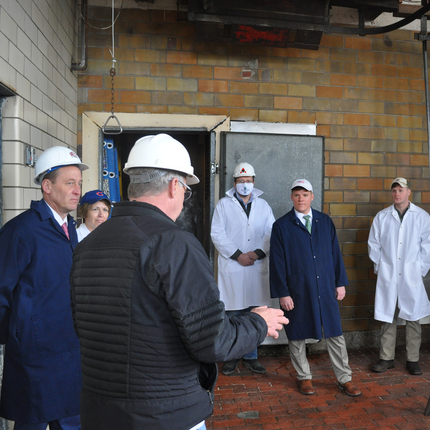 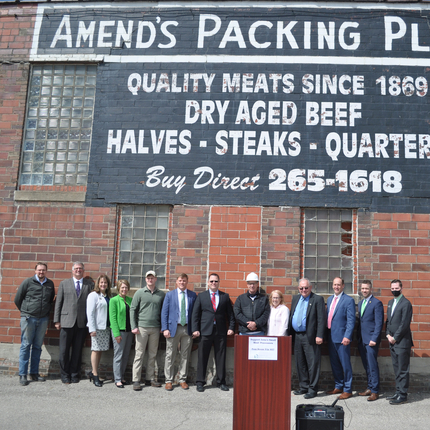 DES MOINES, IOWA – During a press conference hosted by the Center for Rural Affairs on April 22, state lawmakers, small meat processors, and livestock producers called on members of the Iowa Senate to vote on House File 857, a bill which would provide assistance to new and existing small meat lockers.

Joining the lawmakers were small meat processors, Peyton Greiner of Greiner Meats and Locker in Packwood, and Kent Wiese of Amend’s Packing Plant in Des Moines, the site of Wednesday’s press conference.

“House File 857 would be a huge, huge help to all the small meat processors in the state,” Wiese said. “I grew up in a small town eating locker meat. My father and mother would go out every year I would have locally grown meat on my dinner plate most evenings.”

“House File 857 has the tools and teeth to increase competition in the marketplace and support Iowa farming, entrepreneurs, and small towns,” Marquardt said.

Cody Smith, policy associate at the Center for Rural Affairs, closed out the press conference by highlighting the support HF 857 has received so far.

“This proposal has significant bipartisan support which was evident when it passed the Iowa House with a unanimous vote last week,” Smith said. “We urge the Iowa Senate to pass this bill in a similarly swift and bipartisan manner.”

Comments from each speaker are listed below and the full press conference is available here: https://fb.watch/51oHXKBb-j/

“I’m here today to reiterate that while the challenges facing the main street meat lockers across the state are steep, they are not insurmountable,” Rep. Ingels said. “I sponsored House File 857 this session because it offers a solution.”

“I urge my colleagues in the Senate to pass House File 857 to put Iowa’s processors on a path to prosperity.”

“House File 857 would be a huge, huge help to all the small meat processors in the state,” said Kent Wiese, owner of Amend’s Packing Plant in Des Moines, Iowa. “I grew up in a small town eating locker meat. My father and mother would go out every year I would have locally grown meat on my dinner plate most evenings.”

“We saw the Iowa Department of Agriculture and Land Stewardship administer $3 million in grants throughout the pandemic and we also know there are $4 million in unfulfilled requests out there,” said Rep. Phil Thompson, the Chairman of the Economic Development Appropriations Subcommittee in the Iowa House. “So, we really want to fund this aggressively and make this a priority for leadership in the Iowa Senate.”

“I understand small lockers and the importance of this bill to Iowa’s economy can’t be understated,” said Sen. Shipley. “If we’ve got this going on, we can create some really good jobs--jobs that are steady and there’s going to be work to do every day. And, this is an opportunity for livestock producers of any size.”

“A year ago I answered my phone on a dreary day and it was one of my livestock producers,” said Sen. Sweeney. “One of my friends who had some fat steers ready to go. He was in tears. He said, ‘Annette something has to be done for us to be able to take our animals for harvest.’”

“So, I am looking forward to taking a step forward. Let’s get this processing back to the heartland where it belongs.”

“It is crucial for us, especially out in the rural areas, for us to be able to take our quality products to a place such as Kent and Amy’s here today.”

“It’s my first year in government and it’s my job to solve problems,” Sen. Green said. “We have a quality product and high demand, but we also have a processing issue. This bill would help address that and I’m hopeful we can get it across the finish line.”

Peyton Greiner, owner of Greiner Locker and Meats in Packwood

“I can't overstate the effect that this bill would have on every small- or medium-size meat processor in the state, but especially those who are just starting out like myself.”

“When I bought my plant 3 years ago, I was 24 years old and I became the youngest plant owner in the state. To my knowledge, at 27 I still am and that’s young to be going into business, but I shouldn’t be by so far the youngest.”

“As an advocate for small communities across rural Iowa, it is my pleasure to speak in favor of House File 857.”

“I’m a proponent of local food efforts, so I believe that this bill is a win-win for producers and consumers alike.”

“Many consumers like myself choose to purchase their meat from farmers they know and trust and consumers also feel a connection to their food when they purchase from their local meat lockers.”

“I was proud to vote for this bill when it passed unanimously on the House floor.”

“Expanding local meat processing opportunities is good for Iowa and I encourage my colleagues in the Iowa Senate to send House File 857 to the governor’s desk.”

Aaron Lehman, farmer, and president of the Iowa Farmers Union

“Many of our small and beginning farmers rely on direct marketing of their livestock to consumers and their economic well being is at the mercy of being able to schedule a processing date at their local locker. And, it’s getting harder and harder and harder.”

“Clearly, our local processors are partners of our local farmers. When farmers raise, slaughter, and sell their meat locally, Iowa’s rural economies harvest the economic impact and retain it within their communities and this leads to more vibrant local businesses, schools, churches, and civic organizations.”

“Right now in Iowa, we are down to two inspected kill poultry plants in the entire state and only one ran in 2020. Without a processor, I’m dead in the water--I can’t sell any of my products.”

“Consumers, farmers, and meat processors have each grappled with the unique impact of the COVID-19 pandemic on our agricultural system. But, we also know that these challenges were present long before the virus.”

“Across rural Iowa, folks are hungry for investments in their local food systems. To meet this demand, we must act swiftly and not miss our opportunity to invest in the capacity and leadership of the next generation of Iowa’s main street lockers.”

END_OF_DOCUMENT_TOKEN_TO_BE_REPLACED 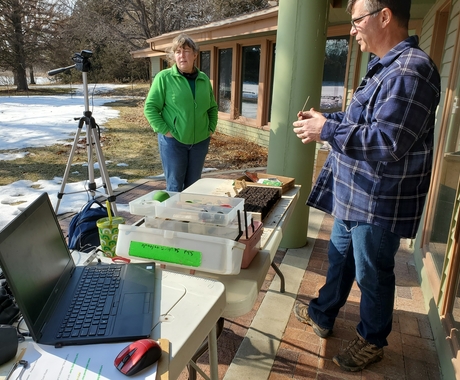 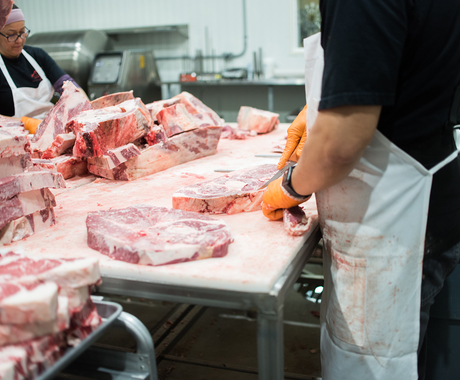 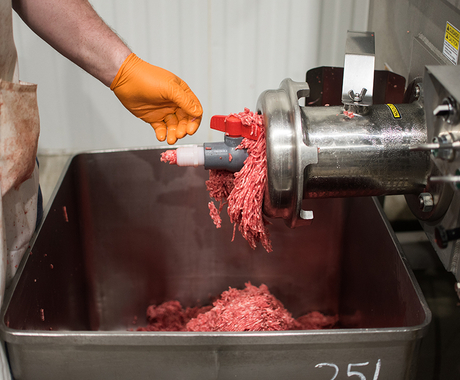