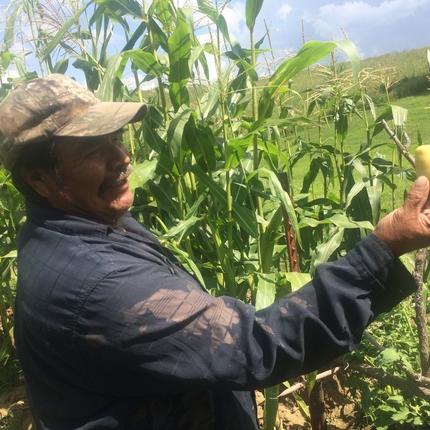 Growing up in Mexico, Tomas and his family harvested chilies and peppers. Now, living in Nebraska, he continues to grow those familiar staples, and has added a plethora of other vegetables to his garden, some of which he was able to sell last summer.

For assistance in selling his produce, Tomas reached out to former Center for Rural Affairs community food associate, Bounthy Parker, who helped run the Omaha Reservation Community Farmers Market, in Macy and Walthill.

“I know Tomas through extended family members,” said Bounthy. “When he found out where I work, he asked if I could take a look at his garden and help him sell some of his vegetables at the farmers markets.”

The Omaha Reservation Community Farmers Market launched in 2013 and has grown to more than 20 vendors. With Bounthy’s guidance, Tomas was able to sell his heirloom tomatoes as one of those vendors, and received many compliments on his produce. He thought the praise might be due to his unique growing methods.

“The way I plant my tomatoes really helps them grow nicely,” he said. “Instead of buying metal tomato cages, I build wooden cages for the plants so they can grow tall and straight."

The gardener uses other innovative, cost-effective ways to keep his garden growing strong year after year, including saving seeds from the previous year to plant during the next growing season. He says the previous year’s squash plants gave him seeds that “grew really nice” last year. Tomas has also moved his garden plot to different locations on his land to find the best soil for growing plants.

“I like growing my own foods, especially peppers,” said Tomas. “I use the vegetables from the garden to make salsas, and I use the corn a lot in other dishes. Last year, I sold some corn at the farmers market, too."

“Tomas sold his vegetables at both the Macy and Walthill farmers markets for a short time last summer,” said Bounthy. “This year, he plans on expanding his garden and participating in the markets again.”

As for the produce that doesn’t sell, Tomas said he planned on canning the rest of his harvest to enjoy all year long.

During the growing season, the Omaha Reservation Community Farmers Market is open from 3 to 6 p.m. every Thursday. Locations rotate between downtown Walthill, Nebraska, and downtown Macy, Nebraska.

Throughout the year, various workshops are held, including canning, preserving, storing, preparation, and more. Visit cfra.org/events for more information.