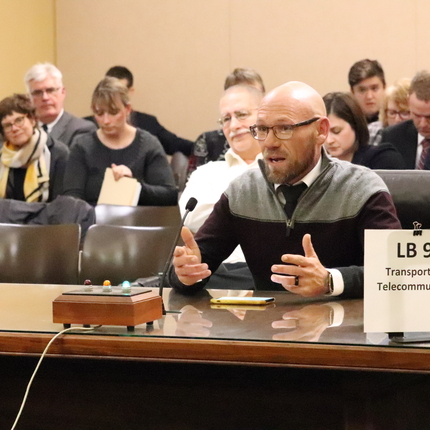 When all is said and done, Tabbert will spend more than $12,000 for the service he and his husband need to work from their home in Antelope County.

After discussions with neighbors and internet service providers, Karpf, a Center for Rural Affairs board member, was able to get service at his home in southern Sioux County.

But, it was slow.

“I spent many evenings in town doing private internet work at my office because we couldn’t get decent internet service at home,” Karpf told members of the Nebraska Legislature’s Transportation and Telecommunications Committee during a hearing last week.

On Feb. 3, Karpf, who now lives in Omaha, joined Center for Rural Affairs Policy Director Johnathan Hladik, Tabbert, Mark Metcalf, and others to testify in support of a bill addressing rural broadband service as part of a hearing before the Nebraska Legislature’s Transportation and Telecommunications Committee.

Drafted by the Center in partnership with Sen. Tom Brandt’s office, Legislative Bill (LB) 996 would create the Broadband Data Improvement Program. Enactment of this program will help ensure the state is able to fully access federal broadband grant programs by complying with data verification requirements set forth by the Federal Communications Commission (FCC) as part of the establishment of the Digital Opportunity Data Collection (DODC) program in July.

The DODC program is designed to improve upon the Commission’s current approach to data collection, which relies on Form 477 to make broad access generalizations at the Census block level. Use of that form enabled providers to claim that homes and businesses had broadband coverage when in fact they did not.

“When this claim is made, those addresses become ineligible for state and federal broadband funding,” Hladik said. “These overstatements of coverage are responsible for many of the access challenges we see in our state today.”

The report and order also adopts a process to collect public input, known as crowdsourcing, to verify the accuracy of information submitted by the providers.

Danny Delong, a volunteer with AARP Nebraska, said LB 996 can play a key role in bringing broadband to areas that are now on the wrong side of the digital divide.

Representatives from the Public Service Commission, the League of Women Voters of Nebraska, and Nebraska Farm Bureau also spoke in support of the bill. Nine Center advocates submitted letters of support. No one testified in opposition.

Metcalf, a Center supporter, has spent the last year trying to get service to his home 5 miles northwest of Sutton, to no avail.

“Yes, our smart phones give us internet access, but when we need to send and receive some documents online, we have to use our public library,” he said. “Thank goodness for our public library and its capabilities, but, still, we have to drive 5 miles into town to get to the library, and we’d rather not conduct our private business in a public facility.”

In urging the committee to support the bill, Hladik noted that, on Jan. 30, the FCC approved its largest investment ever to close the digital divide. The Rural Digital Opportunity Fund, will distribute up to $20.4 million in funding over the next 10 years.

“LB 996 makes Nebraska eligible for a greater share of federal funds,” he said.

Funds would be distributed in two phases.

The first phase will target $16 billion to Census blocks with no broadband service. Because only 54,000 of the country’s 6 million areas identified are in Nebraska and the form used to determine the areas significantly overstates broadband eligibility in Nebraska, Hladik said the state’s share will be very small.

The second phase will distribute funds based on data gathered from the DODC program, targeting underserved households as identified by improved data submitted by providers and the results of crowdsourcing efforts implemented at the state level.

“States that are able to identify underserved households through crowdsourcing will be eligible for a greater share of federal funds,” Hladik said.

Sen. Brandt thanked Hladik for his work on the bill and he “greatly urged” the committee to support LB 996.

“It’s past time that we start striving toward economic development in our rural areas, which is what rural broadband connection amounts to,” Sen. Brandt said.

On Feb. 12, with strong support from its members, the committee voted to advance LB 996. Brandt has designated LB 996 as his priority bill for this session.

END_OF_DOCUMENT_TOKEN_TO_BE_REPLACED 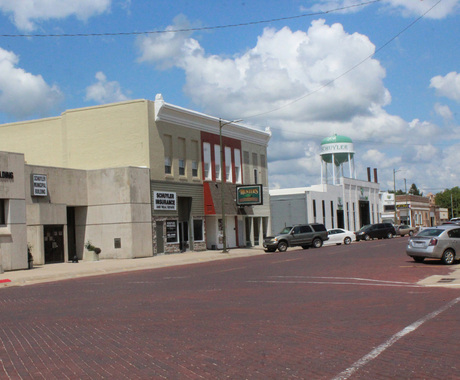 Cody Smith
04.20.2021
Iowa Legislative Update—April 20, 2021
We are nearing the end of the 2021 legislative session as lawmakers concluded their 14th week last Friday. We have been continually grateful for the support that countless rural Iowans have demonstrated for the priorities we are pursuing this year.
END_OF_DOCUMENT_TOKEN_TO_BE_REPLACED