Learning is a lifelong endeavor for Center staff member 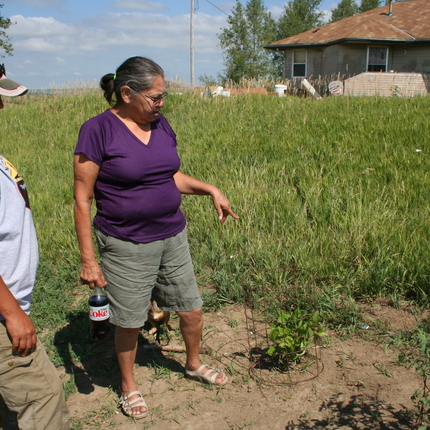 Since 2015, Suzi French has been a valuable member of the Center for Rural Affairs team, and, recently, she just became even more of an asset to the Center’s work.

As a community foods associate working alongside the Omaha Tribe in Walthill, Nebraska, Suzi focuses on assisting residents who live on the Omaha Reservation. She helps people plan and start their gardens, as well as guides them in building a business from their home gardens, all while bringing the community together.

“We focus on market sales for our local producers and artisans,” said Suzi. “The farmers markets have become a place of inclusion for our community. Native and non-Native people come together to support our farmers markets—some sell their goods and some buy.”

Though Suzi has years of hands-on experience, she recently added even more skills to her position. In May, Suzi graduated from Nebraska Indian Community College (NICC) with an associate’s degree in general liberal arts.

“Prior to working for the Center, I had not grown anything, and had little knowledge about gardening, so I researched, studied, asked local farmers, and basically learned right alongside the producers,” she said. “I took classes at NICC studying topics like natural resources, grant writing, business, agribusiness, and other courses that would help me in my work.”

With her newly obtained degree, Suzi hopes to continue assisting gardeners by helping them expand their gardens into larger, commercial scale production operations.

“The classes I have taken at NICC have assisted me with my job these past few years,” she said. “I have taken several science classes that have helped me address issues in the field dealing with the poor soil quality.”

Suzi believes this knowledge will also aid her work at the Center by offering her different perspectives and ways of approaching her work.

“Because of my grant writing course, I was able to assist in writing a grant for the local 4-H club, which was then awarded to them,” she said. “Attending classes covering Omaha Tribal history and language broadened my understanding of what food the Omaha people survived on—what they grew, foraged, gathered, or hunted pre-colonization.”

After completing her degree, Suzi is excited to keep working toward building a sustainable local food system.

“My role requires me to be a fast learner—a person who can adapt and find solutions,” she said. “This role requires a person who can teach, learn, and grow. As we assist the communities we serve, we learn with the producers, from planting the seed to harvesting the crop. I started taking classes at NICC that would help me with those aspects of my job, and it feels good to have a college degree. It’s never too late to get your education.”