Growing the future at UMÓⁿHOⁿ Nation 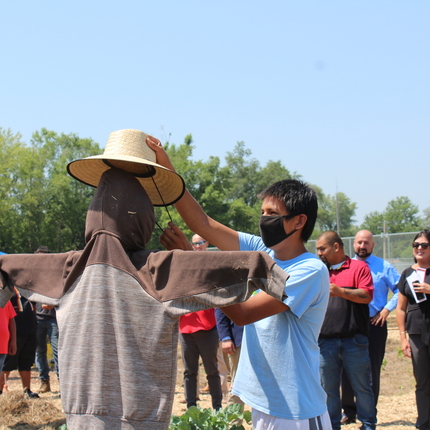 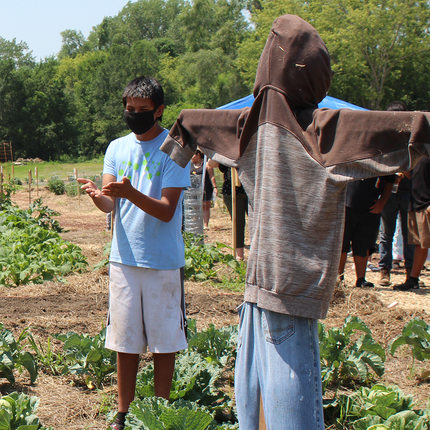 Incoming sophomore student Donovon Hastings at UMÓⁿHOⁿ (Omaha) Nation Public School, in Macy, Nebraska, has come to love working in his cabbage patch. He keeps it well manicured with not a weed in sight. One of his goals is to grow the biggest cabbage possible.

Donovan is one of a group of students who have spent their summer working in the Àshi ta Théwathe (Let’s Go Outside) Program on UMÓⁿHOⁿ Nation’s newly cultivated garden.

The garden is no small undertaking. Numerous plots occupy multiple acres with offerings including tomatoes, zucchini, greens, potatoes, radishes, and others. Traditional blue corn grows high in one portion of the garden with another dedicated to the Three Sisters: corn, beans, and squash grown together. These three crops represent a meaningful facet of Indigenous culture and foodways.

In early 2020, UMÓⁿHOⁿ Nation Public School was given the opportunity to use seven acres of land from the UMÓⁿHOⁿ Tribe to cultivate food. Officials were ecstatic; they had already grown their program to include raised garden beds and built a greenhouse. Seven acres of land would mean larger scale cultivation to feed students and the community. Unfortunately, COVID-19 soon halted their plans with only 5 gallons of corn harvested in 2020.

This year has proven to be different. When ground broke in spring 2021, educators like Delberta Frazier, Brenda Murphy, and Ricardo Ariza sprang into action with 20 students to form the Against the Current Program. Both students and teachers have worked throughout the summer—often through temperatures exceeding 100 degrees—to grow a garden of pride.

The Center for Rural Affairs has been right alongside them—providing technical assistance as necessary.

In addition to cultivation, students have learned important lessons of their culture and language. Vegetables throughout the garden include labels of their names in UMÓⁿHOⁿ language, and lessons include the significance of Indigenous connection to food and environment.

The spirit of community also lies in the garden as many of the crops go directly to local residents. For example, Delberta gives tomatoes to a neighbor.

“It has always been a dream of mine to feed our people, and we’re starting to see that as a reality,” said Delberta, who has taken part in the garden since its inception.

Although not all 20 students return to the garden daily, the ones who do are fiercely dedicated to it. As Donovan tends to his cabbage and makes tomato cages, he says his favorite part of the garden is helping people.

Feature photos: Donovon Hastings, sophomore at UMÓnHOn (Omaha) Nation Public School, has a goal to grow the biggest cabbage possible. He is pictured here placing a hat on a scarecrow in the cabbage patch. | Photos by Rhea Landholm

END_OF_DOCUMENT_TOKEN_TO_BE_REPLACED 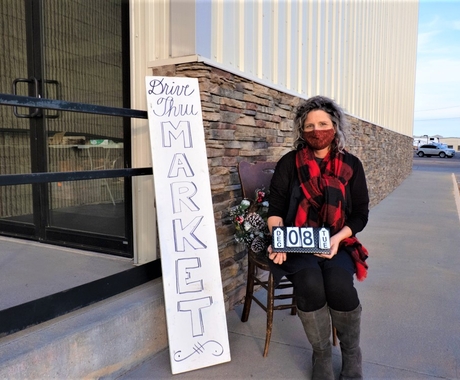 Erin Schoenberg
09.17.2021
Will you be a source of grassroots strength?
We need your support to develop coalitions of people who understand the challenges and realities of building a business, raising a family, and creating resilient communities in rural America. The... 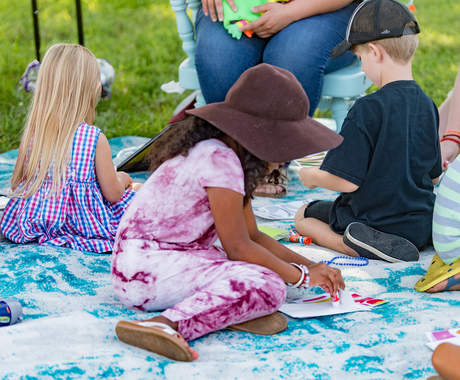 Brian Depew
09.16.2021
From the desk of the executive director: expanded tax credit will reduce rural child poverty
For decades, the Center for Rural Affairs has reported on higher rates of poverty in rural areas. Landmark reports from the Center, including “Half a Glass of Water” and “Trampled Dreams” drew... 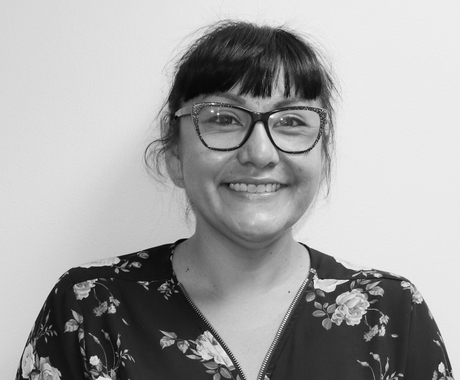 Liz Stewart
09.10.2021
Staff spotlight: Angelina Magerl empowers through education, empathy, and support
Angelina Magerl approaches her work with a level of compassion for others and an appreciation for past generations that is both rare and refreshing in this time of ever-evolving technology and fast...
END_OF_DOCUMENT_TOKEN_TO_BE_REPLACED