Gardening system first of its kind on Omaha Reservation 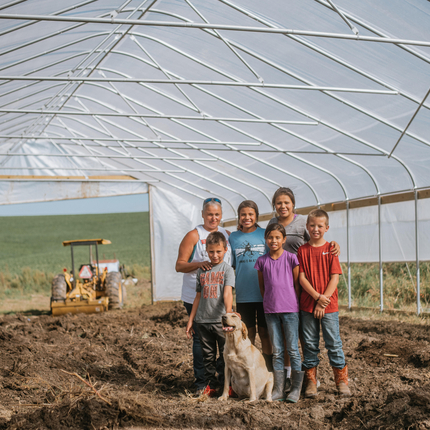 This summer, a member of the Omaha Nation implemented a new gardening practice that could substantially improve the amount of vegetables grown each season on the Omaha Reservation.

Suzi French, along with her husband, Davin, has installed a high tunnel system on their farm, outside Walthill, Nebraska.

High tunnel structures, or “hoop houses,” are plastic, unheated greenhouses. These systems extend the growing season, improve the quality of plants and soil, reduce nutrient and pesticide transportation, improve air quality, and give consumers a local source of fresh produce.

Suzi, a community food associate with the Center for Rural Affairs, says this is a milestone for members of the Omaha Nation – the high tunnel is the first Environmental Quality Incentives Program (EQIP) practice installed by an Omaha Tribal member, and the first funded by the Thurston County U.S. Department of Agriculture (USDA) Natural Resources Conservation Service (NRCS) office.

EQIP covered the entire cost of the materials for the high tunnel system, and Suzi, along with friends and family, put in the hard work to install it.

First, Suzi and her family leveled the ground where the system sits. Next, they measured and squared up the framework, screwed each pipe together, and set up the frame. The end product gave them a very large structure, measuring 30 feet wide, by 72 feet long, by 14 feet high.

“We finished building the system in early August, and recently finished putting in the soil,” Suzi said. “We have worked with Nebraska Indian Community College to start our cool season crops, like cabbage, which are normally put in around the middle of September.”

Suzi hopes to harvest in late November into December, depending on when winter weather sets in, and she intends to start next year’s plants as early as February.

“Produce can be planted in the structure, or started in it and moved out,” said Wyatt Fraas, Farm and Community assistant director for the Center for Rural Affairs. “The structure allows the growing season to be extended several weeks into early spring and late fall, which allows earlier production or a longer harvest season. That's good either for home use or for market sales.”

Wyatt says USDA has encouraged installation of high tunnels since 2010, and thousands of structures have been installed across the country. The tunnels are funded on a dollar per square-foot basis, with the farmer contributing cash or labor for installation.

What makes high tunnels different from greenhouses is that high tunnels are temporary and are only heated through solar gain. The structures range in size from 8 to 15 feet tall and 20 to 100 feet long. They also allow better management of nutrients, water, and energy. In addition, high tunnels offer protection to plants from cold temperatures and pests and diseases, and improve opportunities for market gardeners. Soil health practices such as cover crops and crop rotations, which prevent erosion, suppress weeds, increase soil water content, and break pest cycles, can be used in these structures, as well.

Because high tunnels don’t allow for direct rainfall to reach plants, farmers can use tools such as drip irrigation to deliver water and nutrients to plants in an efficient and effective way. The structures also guard plants from pollen and pesticide drift.

“Perhaps the best thing about high tunnels is that they help farmers provide their communities with healthy, local food for much of the year – food that requires less energy and transportation inputs,” said Wyatt.

In the near future, Suzi wants to implement a watering system, and looks forward to growing plants that aren’t generally grown on the Omaha Reservation. She’ll be able to do it all even when the weather isn’t optimal.

“The high tunnel is great for rainy, cold days,” said Suzi. “We can still manage to get some gardening done and stay warm and dry at the same time.”

The gardener is still exploring new options for gardening in the high tunnel system, and welcomes other families to use the system as a learning tool, as well.

“My hope is to be able to show other Tribal members that it is a benefit to get one of these,” she said. “They could grow their own food longer, we can teach our youth to help them get interested in the agricultural fields, and hopefully feed our families with fresh foods most of the year. This is new to the Omaha Reservation, so I look forward to seeing what other benefits the system provides.”