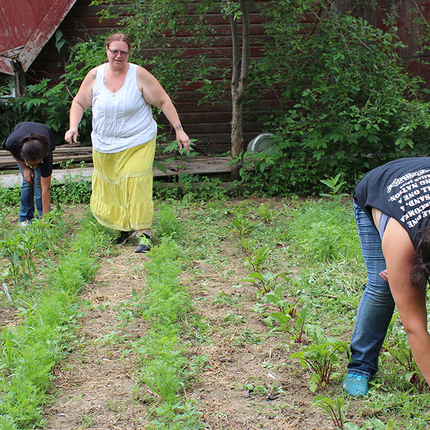 Sustainable and healthy eating is a challenge for many people, especially those in rural areas. However, some people may think the opposite.

April and Suzi work alongside members of the Santee and Omaha Reservations with a focus on their local food systems. Both are located in northeast Nebraska, and the projects are managed in conjunction with Nebraska Indian Community College (NICC).

On each reservation, we work with community members to manage demonstration gardens that contain vegetables and herbs. We also use the gardens for workshops and trainings.

“We have more than 200 families that I garden with in their backyards,” Suzi said. “We’re focused on healthy eating, and introducing and getting back to traditional foods.”

Additionally, we host farmers markets in Macy and Walthill on the Omaha Reservation and near Santee on the Santee Reservation. Extra produce from gardens are put into food baskets, which are distributed at an affordable price among community members.

“We give them an opportunity to make money by selling their produce at the farmers market,” Suzi said. “We do workshops where we demonstrate how to use what we’re growing and how to cook it healthier instead of frying. We also teach different ways of preservation, whether it be canning, drying, or dehydrating – we teach it all.”

Why does living in a rural area make it difficult to eat healthy?

Living in a rural area does not necessarily mean there’s access to fresh, healthy foods. In many instances, being located in a small community makes it more difficult to obtain produce grown in the area.

“Some of the problems we’re solving were problems that I had,” April said. “I moved from the city to a rural location where it’s a 45 minute drive to the nearest full-scale grocery store. So, we went from having access to healthy food whenever we needed it to not being able to find fresh produce.”

What challenges face residents of the Santee and Omaha Indian Reservations?

Diabetes and other health issues are prevalent on the reservations, so healthy eating is important.

“Health is our number one concern,” April said. “We talk about food sovereignty and the concept of having control over where your food comes from, and it’s getting a little bit better in Santee.”

“The importance of healthy food, and growing it as naturally as possible, is impacting our Native American health,” Suzi said. “As we meet our tribal members – and I go meet them at home where they’re comfortable – they can open up and tell me what kinds of vegetables they like.”

Both Suzi and April work in conjunction with tribal programs, such as wellness and diabetes prevention.

“We’re definitely on the right road to changing our epidemic of diabetes and finding alternative healthy foods to eat instead of pop, chips, candy, that kind of thing,” Suzi said.

Another positive effect of the program is that people are getting outside and are more active.

“The doctor who works at the Wellness Center said that is a big positive aspect,” April said. “People are not just sitting inside all day; they’re actually getting out and working in the ground and enjoying being outside. They are then connecting with family members and neighbors and there is more interaction among generations.”

Suzi said they are working to preserve traditions and culture.

“There’s a loss of communication between our elders and youth,” Suzi said. “Our work is to help them grow and access fresh produce, fruit, and vegetables, and make them realize the importance of eating healthy. We are connecting them to our traditional ways of gardening.”

Suzi worked with only 18 backyard gardens on the Omaha Reservation during her first year with the Center for Rural Affairs. In 2016, she worked with 104. This year, there are more than 200.

“Our people want to eat healthy,” she said. “They want fresh food.”

What is being done to bring about change to these areas?

With assistance from the Center for Rural Affairs, more and more residents are becoming interested in their food systems.

Residents are starting to earn profit for their hard work, as well, by selling extra produce at the farmers markets.

“This year, I’ll probably have 50 people sell their items at the farmers market,” Suzi said.

What other options are available to residents?

Supplemental Nutrition Assistance Program (SNAP) benefits are accepted at farmers markets on both the Santee and Omaha reservations, and for food baskets on the Santee Reservation.

After the growing season is over, there’s still a chance to sell and purchase healthy foods.

“We have a large bazaar in December that brings all the vendors together in Macy,” Suzi said. “We do a lot of canning of jams, jellies, and salsa. This year we’re going dehydrate and freeze our produce. The bazaar is an opportunity to make extra money in December before Christmas.”

How can you help bring a sustainable food system to your area?

“Reach out to existing farmers markets in the area or neighboring communities,” April said. “Or, if you have neighbors who sell items, start making connections.”

Those interactions can lead to discussions of creating more farmers markets, co-operative food baskets, or something similar.

“The internet makes it easier to find information to start growing produce, especially for people who don’t have experience,” April said. “And, I would always recommend to start small.”