Center for Rural Affairs May and June 2019 newsletter 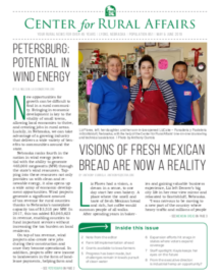 Since its inception, the Center for Rural Affairs has chosen to advance a set of values that reflect the best of rural America. This month’s newsletter focuses on “genuine OPPORTUNITY for all to earn a living, raise a family, and prosper in a rural place.”

In this edition, you will read about Liz Flores who opened a Mexican bakery, after noticing a need in her town. She’s creating opportunity for herself, her family, and her neighbors.

Residents in Petersburg, a town of just over 300, found opportunities for growth in wind development. With the addition of nearby wind turbines, jobs were created, houses were built, and families have moved in.

We explain the USDA rulemaking process and how you have the chance to comment on changes in farm bill programs later this year.

The state of Iowa has an opportunity to clean up its water. Despite investments over the past two decades, there is much room for improvement. We recently released a paper outlining ways to move forward.

Unfortunately, we learn the state of Nebraska is not giving our hardworking neighbors a fair opportunity after voters approved expanding the state’s Medicaid program.

In our executive director’s essay, he talks about changes made in the farm bill to loosen restrictions on growing hemp. He identifies factors communities and lawmakers should consider to give family farms an equal opportunity.

Lastly, you will meet Kayla Bergman, a policy associate based in Iowa, who is focusing on expanding the Center’s work in rural Iowa and southern Minnesota on the topics of climate and clean energy.

Petersburg sees the potential in wind energy - New opportunities for growth can be difficult to find in a rural community. Bringing in economic development is key to the vitality of small towns, allowing local economies to thrive, and creating jobs in rural areas. Luckily, in Nebraska, we can take advantage of a growing industry that delivers a wide variety of benefits to communities around the state.

From the desk of the executive director: Is industrial hemp an opportunity? - The most recent farm bill establishes a roadmap for the cultivation of industrial hemp. Congress was right to loosen the restriction on growing this crop, a non-psychoactive relative of marijuana.

Farm bill implementation ahead - The final farm bill passed in December 2018. Now, our attention turns to the U.S. Department of Agriculture (USDA), which is responsible for enacting the farm bill. Below describes how and when your input is particularly valuable.

Grants available to Iowa farmers - The Center for Rural Affairs is partnering with Farm Aid and Iowa Farmers Union to provide grants up to $500. Individuals must be located in an area damaged by the recent flooding and must be farmers.

Progress has been made, but challenges remain in Iowa's pursuit of clean water - Since 2012, the state of Iowa has invested approximately $541 million to improve water quality, an estimated $4 to $6 billion problem in the state. Meanwhile, the federal government has paid Iowa farmers more than $2.76 billion for on-farm conservation practices over the past two decades. Even with this investment, water quality in the state has much room for improvement, according to a Center for Rural Affairs report released in March.

Expansion efforts hit snags in states where voters expand coverage - On April 1, the Nebraska Department of Health and Human Services (DHHS) submitted a State Plan Amendment to the Centers for Medicare and Medicaid Services for review. The plan is a key first step to expanding the state’s Medicaid program to provide health insurance to those in the coverage gap. Pending approval, the plan outlines an October 2020 timeline for enrollment. This leaves hardworking Nebraskans in the coverage gap for nearly two years after the passage of the ballot Initiative 427.

Staff spotlight: Kayla keeps her eyes on the future - Though she’s new to the Center for Rural Affairs team, Kayla Bergman already has big plans for her role in the organization.