Center for Rural Affairs May and June 2018 newsletter 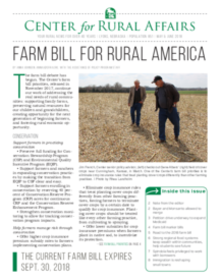 Since its inception, the Center for Rural Affairs has chosen to advance a set of values that reflect the best of rural America. This month’s newsletter focuses on “ACTION to shape the future.”

Throughout this edition, you will see this value in rural residents forming food policy councils; in Nebraskans as they seek to put Medicaid expansion on the November ballot; and in our own Veronica Spindola as she assists rural entrepreneurs.

Although the U.S. Department of Justice is allowing Bayer and Monsanto to merge, we’ve heard from many of you who took action, by submitting comments against the merger.

Action is also found in our executive director’s essay as he tells us about the Center’s work with immigrants to expand their involvement in leadership, businesses, and farms.

And, finally, we ask you to take action while lawmakers in Washington work on a new farm bill.

Farm Bill for rural America – The farm bill debate has begun. The Center’s farm bill priorities, released in November 2017, continue our work of addressing the real needs of rural communities: supporting family farms, preserving natural resources for our children and grandchildren, creating opportunity for the next generation of beginning farmers, and fostering rural economic opportunity.

From the desk of the executive director: Immigration reshaping small towns – Rural America is often characterized as mostly white and a place with few immigrants. Those of us who work in small towns across the country know this generalization is slowly being swept aside. Across the country, small towns are being reshaped by new waves of immigration.

Corporate farming notes: Bayer and Monsanto allowed to merge – A major wave of consolidation that kicked off in 2016 continues to move forward with the U.S. Department of Justice allowing chemical producer Bayer to acquire the U.S. based seed company Monsanto, reported April 9.

Petition drive underway to expand Medicaid – Nebraska is seeking to join 32 other states and the District of Columbia in expanding Medicaid. A petition drive is underway to pose the question to voters in the November general election.

Staff Spotlight: Spindola feels privileged to work with borrowers – My goal is to help small towns stay vibrant places to live by creating new businesses, and assisting communities grow from the inside out. I want to keep small towns attractive for individuals to stay in or come back to their birthplace.