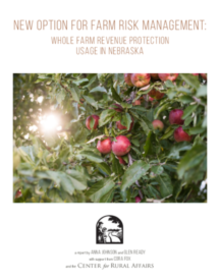 For many years, farmers across the country have purchased crop insurance policies as a way to manage the risk of a yield or income loss. However, crop insurance has stepped into the spotlight as the highest costing federal farm program, at about $8 billion a year.

Despite the size of the program, crop insurance has not been available for many types of crops. In 2015 and 2016, 90 percent of crop insurance premiums covered only 10 crops, forcing commodity farmers who wished to experiment or diversify to do so without insurance. Other producers, such as farmers who grow vegetables or certain small grains, cannot buy insurance.

Often, coverage is available for a crop only on a regional basis. For example, in 2017, a policy was available for apples in 10 counties in Missouri and two counties in Minnesota, but nowhere in Iowa, Kansas, or Nebraska – even though each of those states reported apple production in the previous Census of Agriculture. Organic crop insurance is also limited, and many farmers have only been able to insure their higher-priced, organic commodities at the lower value of their conventional counterparts. This lack of availability often has to do with how crop insurance policies are calculated. As with other insurance, a crop is protected based on its value.

However, basing policies on yield history means less common crops are often uninsured. For example, in 2012, there were 22 Nebraska farms that raised safflower in nine of Nebraska’s 93 counties. Insurance agents and companies cannot make a reasonable prediction on an expected safflower yield in a county with only one farmer who plants safflower. Farmers and ranchers who wish to diversify their production and rely on crop insurance as a risk management tool are less likely to raise and market uncommon crops.

A new crop insurance product designed to address these concerns and expand coverage for farmers and ranchers is Whole Farm Revenue Protection (WFRP). WFRP was created by the Agricultural Act of 2014, also commonly known as the 2014 farm bill. Up to $8.5 million of an operation’s revenue can be covered through WFRP, providing farmers and ranchers with the option to insure more crops and livestock, ranging from corn and soybeans, to pumpkins and berries.

Another feature of WFRP is that it rewards diversification. WFRP, like all crop insurance, is subsidized by the government, and farmers can qualify for a higher subsidy level if they produce more than one commodity on their farm. A farmer raising corn, soybeans, and cattle could qualify for the same higher subsidy level as a farmer raising goats, vegetables, and tree fruit.