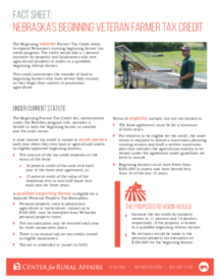 This credit incentivizes the transfer of land to beginning farmers who have served their country as they begin their careers in production agriculture.

The Beginning Farmer Tax Credit Act, administered under the NextGen program title, provides a benefit to both the beginning farmer or rancher and the asset owner.

A state income tax credit is issued to asset owners each year when they rent land or agricultural assets to eligible/approved beginning farmers.

A qualified beginning farmer is eligible for a separate Personal Property Tax Exemption:

•  The tax exemption may be received each year for three consecutive years.

•  There is no annual cap on tax credits issued to eligible landowners.

Terms of eligibility include, but are not limited to:

• The lease agreement must be for a minimum of three years.

• For relatives to be eligible for the credit, the asset owner is required to attend a succession planning training session and draft a written succession plan that includes the agricultural asset(s) to be rented under the agreement under guidelines set forth in statute.

The proposed revision would:

• Increase the tax credit for property owners to 11 percent and 16 percent, respectively, if the property is rented to a qualified beginning veteran farmer.

• No revisions would be made to the personal property tax exemption of $100,000 for the beginning farmer.

The Beginning Farmer Tax Credit has proven to be effective.

• A 2015 survey of program participants found that of the beginning farmers who leased land, 85 percent continued to rent or were able to purchase the same property.

• Since 2008, 18 percent of rental agreements were between close relatives.

• The Personal Property Tax Exemption was added for the beginning farmer or rancher.

• Close relatives were made eligible to receive a tax credit if the asset in the rental agreement is included in a written succession plan to transition the asset between the two parties.

• Owner’s eligibility requirements expanded to include all individuals or business entities who have an ownership interest in an agricultural asset located in Nebraska.

In 2009, the number of applications increased 33 percent.

The Beginning Farmer Tax Credit has helped bring together retiring and beginning farmers, while countering farm consolidation and the aging of Nebraska’s farmers. As of 2012, the average age of a Nebraska farmer was 55.7, making the state’s farmer population the youngest in the nation.

The Beginning Veteran Farmer Tax Credit incentive can help build upon the success of the existing program, while recognizing and valuing the service of our military veterans who are interested in pursuing a career in farming.

NextGen eligibility review and application assistance is made available by the Nebraska Department of Agriculture. NextGen, the Nebraska Beginning Farmer Network, and its partners, including veteran groups, assist with program promotion. More information is available at NextGen.Nebraska.gov.