Iowa’s Role in Cleaning up the Gulf 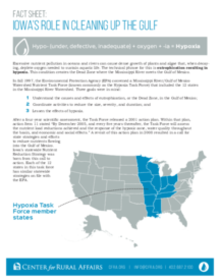 Click the image to download.
Excessive nutrient pollution in oceans and rivers can cause dense growth of plants and algae that, when decaying, deplete oxygen needed to sustain aquatic life. The technical phrase for this is eutrophication resulting in hypoxia.
This condition creates the Dead Zone where the Mississippi River meets the Gulf of Mexico.

In fall 1997, the Environmental Protection Agency (EPA) convened a Mississippi River/Gulf of Mexico Watershed Nutrient Task Force (known commonly as the Hypoxia Task Force) that included the 12 states in the Mississippi River Watershed. Three goals were in mind:

After a four-year scientific assessment, the Task Force released a 2001 action plan. Within that plan, action Item 11 stated “By December 2005, and every five years thereafter, the Task Force will assess the nutrient load reductions achieved and the response of the hypoxic zone, water quality throughout the basin, and economic and social effects.” A revisit of this action plan in 2008 resulted in a call for state strategies and efforts to reduce nutrients flowing into the Gulf of Mexico. Iowa’s statewide Nutrient Reduction Strategy was born from this call to action. Each of the 12 states in this task force has similar statewide strategies on file with the EPA.

The Iowa Nutrient Reduction Strategy aims to reduce the amount of nitrogen and phosphorus in Iowa’s waterways by 45 percent, and, at the current rate of progress, will be achieved long after the target date of 2035. This strategy was developed through an interagency partnership among Iowa State University, Iowa Department of Natural Resources, and the Iowa Department of Agriculture and Land Stewardship.

Estimates for cleaning Iowa’s water range from $4.8 billion to $9.6 billion based on the assumption that $3 million is needed in each of 1,600 HUC-12 watersheds to address both water quality and flood mitigation. The Nutrient Reduction Strategy notes an additional $1.5 billion will be needed in infrastructure investments to require municipal discharge permits to develop processes for nutrient removal.

Efforts in other states include watershed planning

Iowa is not alone in carving a path to improve water quality. The other states in the Hypoxia Task Force offer a learning opportunity through their successes and failures. Many states, including Minnesota, Kentucky, Wisconsin, and Ohio, require watershed plans as a method of improving water quality.

The role of watershed planning

A watershed plan is a road map to achieve improved water quality within a watershed. Where water quality issues exist, a good watershed management plan defines how to solve them. These plans consider the specific characteristics of a local watershed to create goals and reduce the risk of flooding and pollutants by determining where on the ground practices should be placed.

The goals of an effective watershed plan are defined by regulatory standards at the state and federal levels. A good watershed plan is a community effort, written with the involvement of a broad list of stakeholders, farmers, partners, local leaders, and landowners.

“Flowing Forward: planning Iowa’s water quality future,” a report published in 2019 by Katie Rock and the Center for Rural Affairs, can be found at cfra.org/publications/FlowingForward.