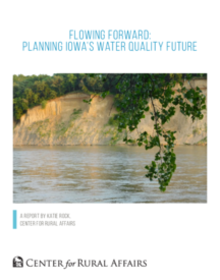 Click the image to download.
Iowa holds a rare landscape lush in high yielding, rainfed agriculture, but the bounty comes at a price. The state’s water quality threatens public health and outdoor recreation with excessive nitrate, phosphorus, bacteria, sediment, and other pollutants in surface waters. The modern agriculture landscape has altered the movement of water within the state’s watershed and reduced the land’s natural resiliency. Over the five years since Iowa created the Nutrient Reduction Strategy and began its Water Quality Initiative, improvements on the landscape have made a positive impact, but water quality continues to decline.

The Nutrient Reduction Strategy aims to reduce the amount of nitrogen and phosphorus in Iowa’s waterways by 45 percent, and at the current rate of progress, will be achieved long after the target date of 2035. Critics and advocates say progress is hampered by a lack of funding and a lack of accountability to measurable standards. Estimates for cleaning Iowa’s water range from $4.8 billion to $9.6 billion based on the assumption that $3 million is needed in each of 1600 HUC-12 watersheds to address both water quality and flood mitigation. Many water quality improvement practices do double duty in addressing both. The Nutrient Reduction Strategy also notes an additional $1.5 billion will be needed in infrastructure updates if municipal discharge permit requirements are expanded for nutrient removal.

Funding for water quality in Iowa comes from multiple sources, but mainly through the federal and state government. Since 2012, the state government has invested approximately $541 million in improving water quality. Since 1997, the federal government has paid Iowa farmers more than $2.76 billion to put in on-farm conservation practices that positively impact water quality. Yet, Iowa continues to lead other states in its role in growing hypoxia in the Gulf of Mexico. Iowa disproportionately contributes nitrate pollution into the Gulf of Mexico compared to other states in the Mississippi River Basin. This is in part due to increases in intense, frequent rainfall and an uptick in nitrates flowing into streams, mostly as nonpoint source pollution. Iowa ranks fourth nationally in flood-related Federal Emergency Management Agency disaster declarations from 1988 to 2016 with 951 county declarations. Every county in Iowa has had at least four disaster declarations in the last 30 years. Data from the Des Moines Water Works on the Raccoon River shows that nitrate concentrations and loads to streams have disproportionately increased more than precipitation. In comparing 1974 to 1995 (22 years) to 1996 to 2017 (22 years), increases are shown in:

Of the load increase, 74 percent has occurred in May and June which coincides with the planting season—a time when nitrate is available in the soil and before row crops are established. These trends and patterns indicate the surge in nitrate pollution is influenced by the lack of ground cover in early spring, the timing and application of nitrogen to the landscape, intensifying precipitation, and subsequent increases to surface water runoff. Climate change plays a role by expanding the amount of heavy rainfall events across the state by 37 percent, resulting in more nutrient loss and soil erosion. The timing of nitrogen fertilizer applications compounded by more intense and frequent rains and a lack of live root systems year round creates problems with nitrates and sediment flowing from Iowa.

Victories in the fight to improve Iowa’s water have been found in strong, local efforts led by volunteer watershed groups. Farmers banded together to form the Soap Creek Watershed Board in 1986 after seeing crops, roads, and bridges destroyed with 4- to 5-inch rains. Working with Natural Resources Conservation Service staff, they drafted a plan to add 150 farm ponds in the watershed, of which 130 remain in place today. In 2006, the Clear Creek Watershed Project formed locally to pursue targeted efforts to clean up their waterways. By following a clear plan of action and working with state agencies to secure funding, local leaders were successful enough to have Clear Creek removed from the state’s list of impaired waterways by 2010.

Farmers in the Miller Creek watershed, an impaired subwatershed within the Middle Cedar River watershed, have banded together to increase on-farm conservation practices through their Soil and Water Conservation Districts and watershed coordinator. Together, cover crop acreage has increased to 16 percent of farmland in the watershed. In 2017, their efforts drained available cost-share funds and a grassroots fundraising campaign began.

Iowa’s water quality issues have not grown from a lack of trying. This track record of local victories and identified need for future investment shows the state knows how to fix its water quality problem, but lacks the capacity to effectively plan and implement the Nutrient Reduction Strategy statewide. The capacity lacks at both an administrative level within state agencies and at the local level in individual counties and watershed organizations. In this report, the Center for Rural Affairs explores the current policy framework for addressing water quality, what Iowa can learn from other states with nutrient reduction strategies, and how Iowa can prepare to scale up its water quality efforts.