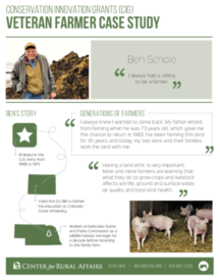 Click the image to download.
Ben Schole, originally from Hooper, Nebraska, works the land that his father farmed before him—land which has deep roots in their family.

Enlisted in the U.S. Army from 1968 to 1971, Ben used the G.I. Bill to further his education at Colorado State University. Later, he worked at Nebraska Game and Parks Commission as a wildlife habitat manager for a decade.

Then, the time was right for Ben to return home to the family farm, and pick up where his father left off. Now, he runs the operation as closely as possible to the way his father did—the farm is a diversified operation, which is practical for a small family farm.

Conservation and fair treatment of the land is of the utmost importance to Ben, so he utilizes different programs such as the Conservation Reserve Program (CRP), Wetlands CRP, and the Conservation Stewardship Program (CSP). The re-establishment of wind breaks, composting of hog’s bedding, and doing split-application of fertilizers, as well as using cover crops like turnips, radishes, and oats, ensures that the land stays at its best.

Check out our feature blog on Ben, by clicking here.

This material is based upon work supported by the Natural Resources Conservation Service, USDA, under number 69-3A75-17-46. Any opinions, findings, conclusions, or recommendations expressed in this publication are those of the authors and do not necessarily reflect the views of USDA. USDA is an equal opportunity provider and employer.