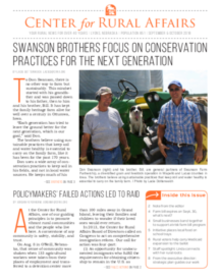 Since its inception, the Center for Rural Affairs has chosen to advance a set of values that reflect the best of rural America. This month’s newsletter focuses on “Citizen INVOLVEMENT to shape the future.”

Throughout this edition, you will read about Iowa brothers who take conservation and water quality to heart; in school officials bringing local foods to lunch trays; in small business owners who are standing up for a farm bill program; in Nebraskans who have successfully placed Medicaid expansion on the November ballot; and in our Chief Administrative Officer Linda Butkus as she returns to her rural roots.

We urge policymakers to get involved in immigration reform to prevent events like the O’Neill raid, where workers were left in insecure and dangerous situations. Following the raid, we saw support pour in from people across the nation from those wanting to help and get involved.

Involvement is also found in our executive director’s essay as he tells us about the Center’s strategic plan that guides our work during the next five years.

Swanson brothers focus on conservation practices for the next generation – To Don Swanson, there is no other way to farm but sustainably. This mindset started with his grandfather and was passed down to his father, then to him and his brother, Bill. It has kept the family heritage farm alive for well over a century in Ottumwa, Iowa.

Policymakers’ failed actions led to raid – At the Center for Rural Affairs, one of our guiding principles is to promote vibrant rural communities and the people who live here. A cornerstone of any community is safety, stability, and trust.

From the desk of the executive director: Strategic plan guides our work – At their most recent meeting, the Board of Directors of the Center for Rural Affairs adopted a new five-year strategic plan.

Initiative places local food on school lunch trays – Engaged communities and connections with farmers are helping make school lunches even better in rural communities. Our kids are reaping the benefits and heading back to school with local foods on their plates through a new initiative from the Center for Rural Affairs and Nebraska Department of Education-Nutrition Services.

Rural voters help carry Medicaid expansion to the ballot – Nebraska is set to be the fourth state in the nation where Medicaid expansion will appear on the November ballot. This comes following months of signature collection and validation, and the dismissal of a lawsuit against the initiative. The state joins Idaho, Utah, and Montana (where expansion will sunset) in allowing voters to decide on the future of health care coverage access for thousands of their neighbors. If passed in all four states, an estimated half-million low income residents would gain coverage.

Staff Spotlight: Linda connects with her rural roots – Chief administrative officer for the Center for Rural Affairs, Linda Butkus is no stranger to rural life.