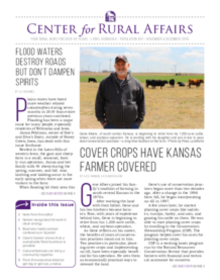 At the Center for Rural Affairs, all of our work ties into our set of values. One value that fits our front page story is “STEWARDSHIP of the natural environment upon which all of us—current and future generations—rely.”

Last March, I had the opportunity to visit south central Kansas where I met Gene Albers who is starting to transition his farm to the next generation.

He lives stewardship every day. Upon our arrival, Gene greeted my colleague and I, then gave us a tour of his land by pickup. He pointed out the different cover crops, and the conservation efforts that have been made over time. We even spotted some pheasants hanging out, enjoying habitat that has been restored.

Gene’s values were instilled in him by his father who had the hindsight to make changes to the land to avoid run-off in the 1970s. And, by making changes in his farming practices, Gene continues that work. From one generation to the next, stewardship lives on in south central Kansas.

However, Gene doesn’t just follow one of our organization’s values, he lives several of them. During the 2018 farm bill, he, along with many of you, was instrumental in urging lawmakers to support the Conservation Stewardship Program. He took “ACTION to shape the future.” Gene wrote guest opinion pieces and we helped him submit those to local publications. This helped with visibility and showed lawmakers in Kansas that he cared.

Cover crops have Kansas farmer covered — Gene Albers joined his family’s tradition of farming in south central Kansas in the 1970s. After working the land with their father, Gene and his two brothers became farmers. Now, with years of experience behind him, Gene is beginning to retire from his 1,200-acre cattle, wheat, and soybean operation.

Flood waters destroy roads but don’t dampen spirits — Plains states have faced more weather-related catastrophes during seven months in 2019 than entire previous years combined. Flooding has been a major issue for many people, especially residents of Nebraska and Iowa. Janna Feldman, owner of Doe’s and Diva’s Dairy, outside of Honey Creek, Iowa, has dealt with this issue firsthand.

From the desk of the executive director: Get big or get out, a redux — Asked about the plight of dairy farmers in Wisconsin, U.S. Secretary of Agriculture Sonny Perdue said, “[The] big get bigger and small go out, and that’s kind of what we’ve seen here… Everyone will have to make their own decisions economically whether they can survive.”

Nelsen recognized for work in clean energy — Each year, Midwest Energy News acknowledges leaders based in the Midwest. This year, the Center for Rural Affairs was represented by one of its own. Policy Associate Lu Nelsen was named one of the recipients of the 2019 Midwest Energy News 40 Under 40 Award.

Business needs prompt conference in Spanish — This August, Ana Gonzalez was among 60 of her peers who heard from Latino business leaders on marketing, leadership, business planning, and legal requirements for small businesses. She attended the Center for Rural Affairs’ inaugural Empowerment for Latina Women in Business Conference, offered solely in Spanish.

Clara’s Garden shows that a sustainable floral business is possible — Being a florist focused on sustainability in the face of our changing climate may be difficult, but Mediapolis, Iowa, mother-daughter duo Meredith and Jen Hinson do just that.

Cultural festivals can bring a community together — Let’s celebrate our rural communities with intention. The Center for Rural Affairs helps communities learn and engage in an intentional way to make long lasting connections across cultures.