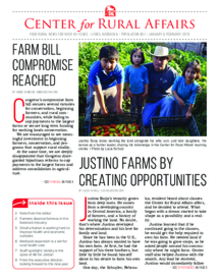 Since its inception, the Center for Rural Affairs has chosen to advance a set of values that reflect the best of rural America. This month’s newsletter focuses on “PROGRESS that strengthens rural communities, small businesses, and family farms and ranches.”

In this edition, you will read about Latino farmer Justino Borja who is making progress toward his dream of owning land.

We are excited that Congress has finally advanced the farm bill. Together, we secured several victories for conservation, beginning farmers, and rural communities. Unfortunately, the bill fails to cap payments to the largest farms or secure long-term funding for working lands conservation.

We are hoping that progress can be made with USDA’s Farmer Fair Practices Rules. The rulemaking process will re-open this spring.

Other progress can be seen in Nebraska as they voted for Medicaid expansion and on the Omaha Reservation as they look toward their future of food independence. Additionally, our executive director talks about progress the Center has made this year. Progress we couldn’t have done without you.

Justino farms by creating opportunities – Justino Borja’s tenacity grows from deep roots. He comes from Mexico, a family of farmers, and a history of working the land. No doubt, that’s where Justino developed his determination and his love for family and land.

From the desk of the executive director: looking forward to the new year – As we look forward to 2019, I am amazed what you—our staff, our board, and our supporters—have achieved. The past year marked the Center’s 45th anniversary. I am proud that the Center remains vibrant and relevant. That was true in 1973 at our founding, and it is true today.

Omaha Nation is working hard to improve health and economic outlooks – The majority of people in the Omaha Nation express a desire for greater local access to fresh produce, according to a report released by the Center for Rural Affairs and the Omaha Nation community.

Medicaid expansion is a win for rural health care – On Election Day, voters in Idaho, Nebraska, and Utah, approved the expansion of Medicaid. This expansion will extend health insurance coverage to more than 300,000 low-income residents. When implemented, no longer will residents earning less than 138 percent of the federal poverty level be left without insurance coverage because they earn too little to qualify for subsidies to purchase coverage from the insurance marketplace and too much to be eligible for Medicaid.

Corporate farming notes: farmers deserve fairness in the livestock industry – You may have heard that the U.S. Department of Agriculture’s (USDA) Grain Inspection, Packers and Stockyards Administration (GIPSA) now functions under the purview of the Agricultural Marketing Service, but that’s not all. According to USDA, the rulemaking process for Farmer Fair Practices Rules will re-open in spring 2019.

Staff spotlight: variety is the spice of life for Jordan – The daily work grind for many people consists of doing the same thing over and over. Jordan Feyerherm, however, spends his days doing everything from teaching cooking classes to writing grants. No day is the same for him, and he wouldn’t have it any other way.