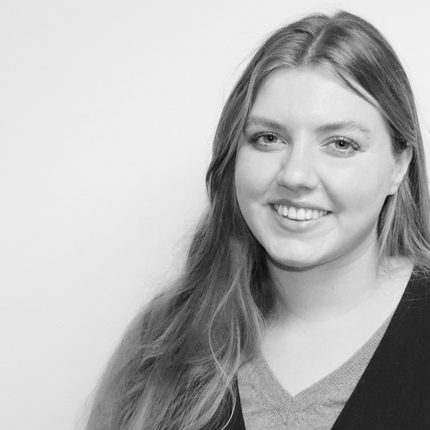 Growing up on an acreage outside of Firth, Nebraska, my responsibility was to take care of the cattle—from the bottle-fed calves to the big bull we knighted Sir Loin. I broke the ice for them in winter and stuck them with needles when the time came for vaccinations. My summers were spent detasseling, hunting down thistles in my grandpa’s pasture, and swimming in creeks when they swelled with rainwater (after making sure my tetanus shot was up-to-date).

While this upbringing allowed me the opportunity to develop a unique set of skills, I was on the other side of the globe when I realized just how much they would come into play.

After graduating from Norris High School in 2013, I attended the University of Nebraska-Lincoln, where I was more interested in the world outside of the U.S. than anything in my home community.

While at UNL, I studied anthropology, English, and French—a hodgepodge of academic fields that meant my course load was always full. During my junior year, I studied abroad in Mongolia, which is a landlocked nation between China and Russia, where a third of the population is still nomadic. I chose that path because I wanted to experience something new and different and to get to know the world outside of my life as a rural kid.

Upon my arrival in Mongolia, I realized I had an error in thinking.

Somehow, I’d chosen the one place on the other side of the world that most reflected my home. The rhythms of life were similar, from the meat-centric meals to the understated generosity. At first, I was disappointed. For all my effort to experience something new and exotic, it seemed that I’d merely traded one rural, rolling grassland for another. But the longer I lived in the Mongolian countryside, the more I realized that experiencing something new didn’t have to come at the cost of forsaking my rural roots.

The similarities, as well as the differences, had drawn me to study in Mongolia. Because of my background living in rural Nebraska, I found a bridge into local life through the shared experience of living in isolated places and working with livestock. Compared to other students in my program, who had grown up in metropolitan cities on the coast, I had a better understanding of horseback riding, potato peeling, and the rhythm of planning errands into town.

Since then, I’ve returned to Mongolia a second time on a Fulbright Fellowship, where I asked to be placed in the countryside—no packed capital city for me. In western Mongolia, my love for animal husbandry and wide open spaces was reinforced. I also recognized similar difficulties faced by rural areas in Mongolia and Nebraska, which fueled my desire to help fight for the little guy.

When I returned home, I was determined to find work that would allow me to give back to the communities and the environment that fostered me. As a policy assistant for the Center for Rural Affairs, I’m excited to combine my passion for rural communities and conservation through the power of policy.

People who live in rural communities should be given the opportunity to be involved in local and nationwide decision-making and encouraged to be good stewards of the land they maintain. For myself, I want to ensure that I can carry on the lifestyle skills that made my parents and grandparents so resilient and self-sufficient.

Andrea lives in Bancroft, Nebraska. Outside of work, she’s recently taken up her high school hobby of archery and has asked her great aunt to teach her how to clean chickens. She is located in our Lyons office and can be reached at 402.687.2100 ext. 1036.

END_OF_DOCUMENT_TOKEN_TO_BE_REPLACED

Gladys Godinez
01.14.2021
Packing plant workers need better protections
Inside packing plants throughout our nation, workers continue to lack enough personal protective equipment, or PPE; don’t have enough space for social distancing; and continue to worry about what is going to happen to them.
END_OF_DOCUMENT_TOKEN_TO_BE_REPLACED